“Search me, O God, and know my heart! Try me and know my thoughts! And see if there be any grievous way in me, and lead me in the way everlasting!”

Everything, that is, except us.

We don’t need to change. We’re just fine. If everybody could just be more like us….

Sometimes it seems like we forget that God’s grace and mercy to us is the same grace and mercy he extends to others. It’s like we forget how his Holy Spirit awakened us, saved us out of the pigpen, and, many times thereafter, restored us from our wayward choices. Instead of focusing our 20/20 vision on what’s wrong with everyone with whom we don’t agree, maybe we should focus on our own hearts.

Maybe we should join the Psalmist, look inward, and ask the Holy Spirit to point out where we can be more like Jesus.

The elder brother turned his nose and puffed his chest at his father’s response to his wayward brother. He didn’t run off like his brother, but his soul was just as dead. This is the brother who stayed home. He did what he was supposed to do. He did his chores. He worked hard. He led. He was there for his dad. He gave blood, sweat, and tears his whole life, but along with it came a sense of self-righteousness and entitlement. He didn’t value his place in the family as the son of a loving and benevolent father. Instead, he found his worth in what he did and didn’t do.

His attitude screamed, “I’m working hard. I’m serving. I’m here every time I’m needed. I don’t run off and waste my life. I don’t party. I don’t hang around with bad characters. I’m better than that little brat.” Instead of grasping the fact that his father loved and accepted him as a dear son, he believed he made himself a worthy son by his conduct.

The elder brother compared himself to his younger brother and figured he was better. Instead of celebrating his younger brother’s homecoming, he resented his return. Instead of empathizing with a loved one who caved to the flesh, he heralded his own perceived glory. Instead of walking a mile in someone else’s shoes, he wouldn’t even walk across the yard to hug his rescued brother.

Sometimes we can get in the bubble of church world and look at everyone else through behavior glasses. Or we see others through our affinities and groups and likes and personal experiences. Instead of looking at them through Jesus’ eyes, we look through our own filters, and, when we see people who don’t live like we do, we get mad at them. I call it “sinvy”—short for sin envy. We actually resent them for getting the pleasure of doing what lost people do.

We’re good at hiding it, but sometimes we grow bitter when the world gets to scratch the itches that our flesh longs to get scratched. Something rises up in us because depriving the flesh is hard. It’s hard to say no to the world. It’s hard to rationalize other people’s behavior.

We compare ourselves to others to make ourselves feel better. We see their shortcomings, and the elder brother in us rolls his eyes. When trouble hits and we suffer, it’s easy to grow angry as we compare ourselves to others who seem to float through life. We look at them like the elder brother looked at the prodigal. We feel that since we live right, we should be blessed in ways that benefit us right here and right now. This is self-centered and shortsighted.

First, we never know what’s going on in other people’s lives, which makes comparison such a devil’s lie. We never know how badly others are struggling—no matter how shiny their packaging. Secondly, the bottom line is that it doesn’t matter what we want. It matters what God wants. And you know what God wants?

Can you look back at a time when you acted like the elder brother in response to someone else’s actions? What was the outcome and what would you do differently in a similar situation?

As you ask the Lord to search your heart, is there anyone toward whom you are harboring a judgmental or vindictive attitude? Are you envious of anyone? What do you need to confess to the Father who longs for you to be holy just as he is holy?

I want to be the change through Jesus. I need God’s help to do this!

This song (and this devotion series) help to keep my feet grounded….not to think that I’m more spiritual than others because……________.
Thank God for people willing to speak the truth and to step on my toes! I need reminded daily of who I am in God’s story, not who He is in mine!

Loved this and really needed the reminder! ❤️

So true. Thank you. Finally a correct view. It was starting to get lonely out there.

❤we are so loved….blessings after blessings… thank you God for your unconditional everlasting love ❤

Our God created us to honor and worship Him only and not the things of this world.

Wow, what a message! I really needed to get this today. If I can know myself, accept myself, and be myself for God’s glory, I will be on my way to overcoming my “sinvy”.
Thank you for the message!

I had been complaining to the Lord about my husband and his walk with the Lord and the Lord told me no matter what He does with my husband I am to follow Him !

I am repeatedly disappointed with this devotion. As per many of my experiences in the church the.blame game is in full swing. I am saved by grace not my performance. I seek God everyday for his help and guidance. It’s NOT MY FAULT.

Kenny
Reply to  CPR plus

To CPR plus, You’re right. It’s not your fault. It’s not mine either. I’ve done the right things, just like the older brother. But then God uses something like this devotional to remind me that it’s not about me. It’s not my story, it’s His. Do I really want to stand in the way of what He’s doing? Am I really that smart? 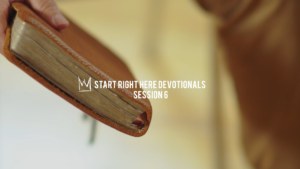 “Know this, my beloved brothers: let every person be quick to hear, slow to speak, slow to anger; for the anger of man does not... Session 4: A Mirror Is Nothing but Truth

“For if anyone is a hearer of the word and not a doer, he is like a man who looks intently at his natural face... “And he arose and came to his father. But while he was still a long way off, his father saw him and felt compassion, and... Session 2: Abundance Is Not the Goal

“And he said, “There was a man who had two sons. And the younger of them said to his father, ‘Father, give me the share...