I love the Book of Daniel from the Old Testament. It has some of the coolest stories with fiery furnaces, lion’s dens, and fantastical dreams. But I missed out on so many important lessons it contained because I was always searching it for clues about the future.

I grew up viewing Daniel through a prophetic lens. Every time I read it, I was trying to get a glimpse into the future so I could be ready to face the tribulation when the time came. I’m not saying Daniel is not not about those things, but it’s definitely about more than just that.

I’ve learned so much about what it means to be a good American from Daniel since I stopped assuming it was about the future. Once I began reading it to shape and transform my current life, I realized it had all kinds of practical tips about living in the world’s most powerful country.

1. Work for the Benefit of Your Country

The New Testament refers to us Christians as exiles in this world. Peter called God’s elect “exiles scattered throughout the provinces,” Jesus said His followers were “not of the world,” and Paul wrote our “citizenship is in heaven.”

I have always struggled to understand what it means to live as a citizen of heaven in my day to day life. I grew up in a Christian school, listened to Christian music, and now I work for a Christian ministry. I have insulated myself from the world because we have created a Christian subculture aimed at keeping us clean and pure from the outside world. My experience of being inside a Christian bubble is not a unique one, but there’s another common reaction to being not of this world.

We try to conquer it and transform into our vision through power, influence, and even violence.

Since I was a child I have often heard about the culture wars we’re in and the ways in which Christians are being persecuted and attacked in our country. There are many who feel the best way to react to this is to fight back. Instead of sitting comfortably in our own Christian worldview, we should do everything we can to bring holiness and righteousness to our land.

I think the Old Testament hero Daniel shows us a better way of being in the world, but not of it: Subversion.

At the end of the ten days they looked healthier and better nourished than any of the young men who ate the royal food. So the guard took away their choice food and the wine they were to drink and gave them vegetables instead.” Daniel 1:8-16

They just did what God asked of them to do, and their captors agreed it was a more beneficial way of living. In his faithfulness to God without expectations on others, Daniel changed the minds and hearts of the people around him.

The prophet Jeremiah was in Assyria about the same time as Daniel, and when he asked God if his countrymen should resist through force or through withdrawing from the Assyrians, God replied with this message:

Build homes, and plan to stay. Plant gardens, and eat the food they produce. Marry and have children. Then find spouses for them so that you may have many grandchildren. Multiply! Do not dwindle away! And work for the peace and prosperity of the city where I sent you into exile. Pray to the Lord for it, for its welfare will determine your welfare. –Jeremiah 29

So instead of being withdrawn or seeking power to force change, God told the exiles in Assyria to work for the benefit of their captors. And not in a moralistic way where they “love” them by telling them how to live holy. God meant in a practical way.

Our calling as Christ followers is not to transform America through force, coercion, or manipulation. Those are the methods used by the world.

2. Beware of Loyalty Turning Into Idolatry.

One of the most famous stories from Daniel is Shadrach, Meshach, and Abednego getting thrown into the fiery furnace. The part that gets a little fuzzy is what that punishment was for, but I would say it was for not being patriotic enough. I know that might seem crazy, but I’m not alone in that thought. John Walvoord, from Dallas Theological Seminary, wrote:

The worship of the image was intended to be an expression of political solidarity and loyalty to Nebuchadnezzar rather than an intended act of religious persecution. It was in effect a saluting of the flag, although, because of the interrelationship of religious with national loyalties, it may also have had religious connotation.

It might be hard to imagine a political party or leader setting up a golden statue at a political event to demonstrate their loyalty and fealty to a leader, but the Romans did it, the Nazis did it, and even Americans have done it.

I cannot imagine the fear and pressure Daniel and his friends felt to just demonstrate their loyalty and commitment to Assyria. I mean, they had been put in positions of power, elevated in status, and given a life of comfort, so their refusal to join in the worship/allegiance/loyalty ceremonies must have really confused and enraged Nebuchadnezzar.

As citizens of heaven we must always be careful to inform our decisions through the priorities of Jesus, without concern for political party or nationality. America is a great nation, but it is not the Kingdom of God, and that means there are times when we must not join in the celebrations and patriotic displays. Even if it costs us our reputation, influence, or life.

Nationalism is an insidious thing that sneaks its way into our hearts and can make us do evil things in the name of our Christian faith. History is full of examples from the Crusades to the Inquisition, to the Nazis, to the Civil War. We must be constantly vigilant to remove any footholds nationalism has taken in our hearts, and we must be ruthless in uprooting it anywhere we see it, lest we find ourselves serving our country in opposition to serving our God.

3. The Success of Your Country Should not Come At the Expense of Others.

Thankfully, most of us are not worshipping our country (even if it easy to slip into). Unfortunately, many of us still think about America and its needs first, but Daniel is full of reminders about why that’s not quite the right perspective to have.

To put it bluntly, the United States of America is temporary.

There are two main dream sequences in Daniel. The first is Nebuchadnezzar’s dream about a statue being destroyed by a rock as big as a mountain. Daniel told the king how the different parts of the statue represent different kingdoms, but the rock that destroys the statue will be a kingdom that never ends: “In the days of those kings the God of heaven will set up a kingdom which will never be destroyed, and that kingdom will not be left for another people; it will crush and put an end to all these kingdoms, but it will itself endure forever” (Daniel 2:44).

Pretty sure that’s not referring to the US.

Then again, in chapter 7, Daniel has a dream about a bunch of kings fighting and killing each other until at last:

“As my vision continued that night, I saw someone like a son of man coming with the clouds of heaven. He approached the Ancient One and was led into his presence. He was given authority, honor, and sovereignty over all the nations of the world, so that people of every race and nation and language would obey him. His rule is eternal—it will never end. His kingdom will never be destroyed.” Daniel 7:13-14

So we know, without a doubt, that the US will come to an end. And someday Jesus will fully establish his kingdom on earth and all nations will come under His rule.

This might seem obvious, but it’s easy to forget when I’m talking about politics or patriotism or policies. It’s easy to think that my favorite politician or policy is going to be the one that fixes the world’s problems, and that in defending them I simultaneously defending the Gospel. But, if I am not reflecting the love and grace in my conversations about the US, then I’ve already defeated my actual purpose.

My goal is not to make America the best or most holy or most powerful nation in the world because it will pass away. My goal is to partner with Jesus in doing God’s will on earth as it is in heaven.

Daniel’s vision of Jesus rising to power and sitting at the right hand of God is a strong reminder that “making America great,” or being “with her,” or believing that “yes, we can,” or any other aim outside of making disciples, speaking with love, and serving the poor and oppressed is foolishness and folly.

Listen to Lauren Daigle’s Stunning Performance of the National Anthem 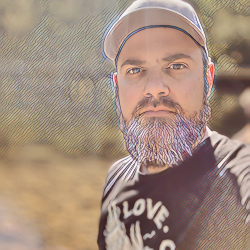 This is a very well written article that brings out many points that should be enlightening to those who read it. But the conquering nation was Babylon. It was a little distracting at first but the points given are as true today as in Daniel’s time.