Party lines were drawn these last few weeks. Opinions, explanations, accusations, slander, gossip, and assumptions leaked into our posts, statuses, stories, and reels to defend our votes – maybe our identities tied to them.

But who was convinced by someone else’s status or comment? Many believers are left just as conflicted as before

because not everyone fits into a party

because kingdom working in politics is complicated

because there are advantages and disadvantages on both sides

because, even though politics are important, there’s no need for more hurt and division.

There’s a lot to consider in light of loving our God and our neighbor and taking time to consider them, can feel lonely when it seems everyone else already “knows.” Here are songs for this in between place:

Jon Guerra calls his music “devotional music” like “Monday prayers.” That’s true of this song “Citizens.” A modern psalm, the lyrics prayerfully acknowledge our internal struggle to our all powerful, personal God. Guerra guides us to reorient our hearts singing,

I have a heart full of questions
Quieting all my suggestions
What is the meaning of Christian
In this American life?

Gable Price and Friends describes themselves as “a rock group from Northern California. They deliver ripping guitar hooks, phat bass, dirty drums, and lyrics that’ll rip your heart in two.” They’re not wrong. This upbeat song featuring Bethel’s Kristene DiMarco calls for self and societal analysis.

Songs that only declare the Truth of who God is, what he has and will do, and who we are in him are necessary AND so are songs that meet us right where we are.  In between songs can ease our physical and emotional discomfort as we hear that others are on the journey.

Conflicted Christian, these artists have provided a soundtrack for the wrestling with what you know to be true and how to practically apply it.  You are not alone.

Would Jesus Talk About Politics? with Brant Hansen 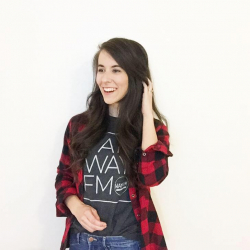